Is Platinum a sleeper?

Is Platinum a sleeper?

It's always been in short supply, and difficult to find, but lately it has become almost impossible to get???
Despite the fact that it is rarer than Gold, the price I believe has been artificially held down by the "big boys" in the manipulated, PM market.
Perhaps because Gold is more widely used in the jewellery market, Platinum "seems" to be less desirable, but it is still being used a lot, and also widely used in manufacturing processes.
So, as it becomes rarer still. will it break out and take it's rightful place above Gold?  It could be a sleeper? and that's why I have decided to add some small amounts to my PM investment fund.
What do you think??

1)  Platinum has a higher melting point than gold and silver.  I think it is around 3000F.
2)  So it is not as meable as gold.
3)  Spot prices are all over the place.
4)  Platinum is more a speculative purchase. It is not as good a hedge against inflation as gold is.
5)  Platinum is riskier than silver, and silver is riskier than gold.
6)  Platinum is now being replaced more and more by palladium in the motor industry.  Which is why palladium has soared in price over the last 10 years.
7)  As we move more towards electric cars, will this kill off both platinum and palladium?
8 )  As we head towards a recession, will prices of platinum/palladium go down because less people are buying cars?
9)  Other sectors like jewellery, medical equipment, science etc alone is not enough to keep prices up for platinum.  Majority of usage is still within the motor industry.

Please feel free to comment on the above.  Would love a discussion as the original question is a very valid one

I missed out on Rhodium when it was this low before the jump. What is or are the uses for this?

Platinum like Rhodium has become very difficult to purchase.

I personally have been collecting fractional 1/10th pieces because I think they are nice, but also in case I move to making anything out of Platinum.

However I am thinking that with more solar power, more under water cables, etc the industry is becoming more Platinum dependant. Perhaps this could be why its difficult to get on the bullion market?

The other reason is that the manufactures are not able to keep up with producing Silver so they are less likely to produce Platinum ??? Thoughts.

I don't know much about rhodium I'm afraid, except that it and palladium belong to the same family group as platinum - LOL! I know it has a very high melting point, and that it (like platinum and palladium) is used in catalytic converters in cars. I have never bought rhodium nor seen it physically - LOL! I've never heard of a rhodium mine either, so I am guessing that it is mined as a by-product? Will have to google for more information....

Max Keiser has often mentioned that silver is used more in solar panels. Platinum not so. It is not as meable to work with and is also very expensive compared to silver. Hence why silver is still the more favoured metal in the manufacture of many products. You can see the falling demand for platinum reflected in the falling prices over the last 10 years. Platinum's price is also more volatile compared to gold and silver. I'm not saying that it is not a good investment - it still is - but I am comparing it to gold and silver. And I am also just talking about the physical stuff, and not ETFs nor futures (paper stuff).

As for the amount of raw materials, there is still a lot of silver and platinum being mined. But as mentioned above, they are reserving a major chunk of this for industrial use. The quota for retail consumers (in the form of coins, bullion, jewellery) is small compared to industrial usage. So when people say there is a "silver shortage" - that is not entirely true, as there is still ample about for industrial consumers. If there really was a world wide "silver shortage", silver price will go to the moon!

Another factor as to why bullion is hard to come by is due to the pandemic. Although mines have remained open, the manufacturers of coins, bullion have been shut for a few months (eg Royal Mint). They are open now though and trying to catch up with demand.

Going off topic a bit.... take a look at firearms.... it is now $1 a round for a 9mm. If you have ammo, you are sitting on an asset worth its weight in gold. And if you want to buy ammo at your local gun shop these days, you will have to buy a gun at the same time. They will not sell you ammo alone. Ammo is hard to get and people are willing to pay a lot of money for it. The pandemic has certainly changed the world, but you can always put trust in precious metals 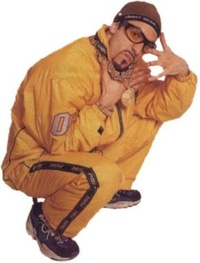 ammo is quite easily available to make for the seasoned reloader and alot cheaper when you visit your local range and reuse the spent cartidge.

Absolutely, although I never reload any brass that I havnt shot.

Hi. I like Platinum. I started trading it on average £620-630 spring 2020..sold within couple months at about £720. I stilled believed in it, still do, but it was boring to watch and wanted the money back for 'shares'. I have a 120 year chart for Platinum, with some technical analysis on it, if anyone wants it...

Post away, I would like to see a view and perspective of someone else other than myself.

I find it nearly impossible to predict as I found Rhodium to predict ... otherwise I would have bought hundreds of ounces. 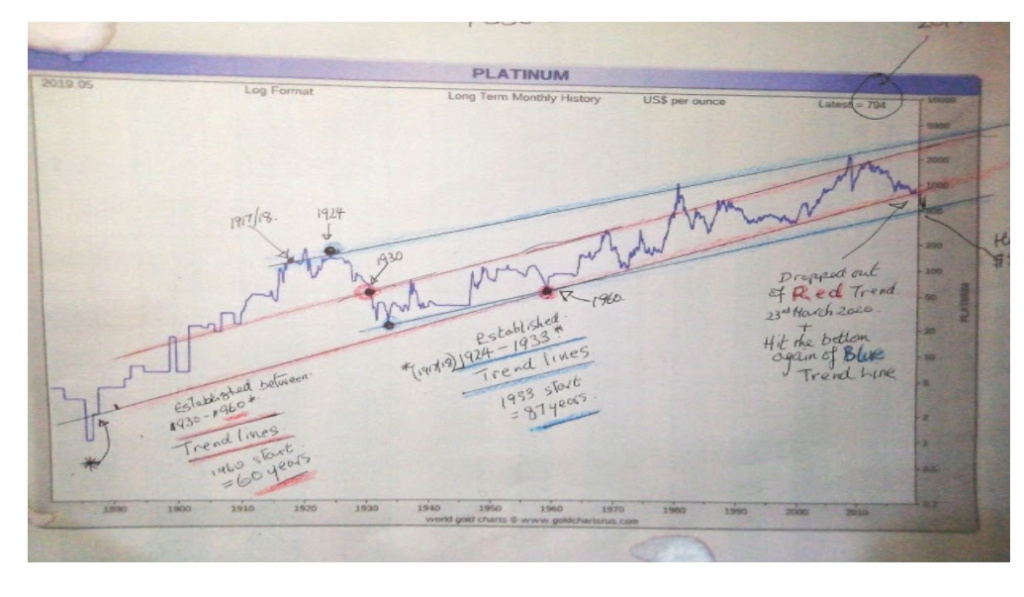 The chart is a bit grey, but if you click on it then more visible.. Hope it helps someone. Platinum back to 1880...

I was not expecting it to be drawn. Wow, that is a lost art these day of computers.

I cant speak as I am far better at drawing than this computer lark.

Great work, a lot of time has gone into making it.

I downloaded the basic chart then put in the trend lines and crucial dates.. etc... I remember back in 2001 I was running a small investment club. We had come in at the end of the dot.com era (little did we know) and one day I was watching a 'investment programme, can't remember what it was, might have been Bloomberg/ British. So this technical analyst came on and started drawing lines on charts.... Saying this company and that etc., are goin to fall big time.. The hosts were like sniggering at him.... But man was he right... It hit me like a bombshell... And so since then and I stress to me - a chart tells Everything... You could read reams and reams of company reports and never know where its going... Many would disagree. But to me it's written in the chart... And has served me well since then... I've many many charts especially of Gold... But over the last few years its all trends within trends and I won't go back to it until it drops to a certain trend level.. Its so unpredictable at moment... Platinum has a future but when it will hit the top of those trend lines again is impossible to say.. But undoubtedly it will..

Wow. Some great information, and a lot of hard work, to build up and correlate all that data, it must have been a labour of love (or a pain in the butt).
I can appreciate the effort and dedication required to be able complete such a detailed chart.
Thank you for sharing. 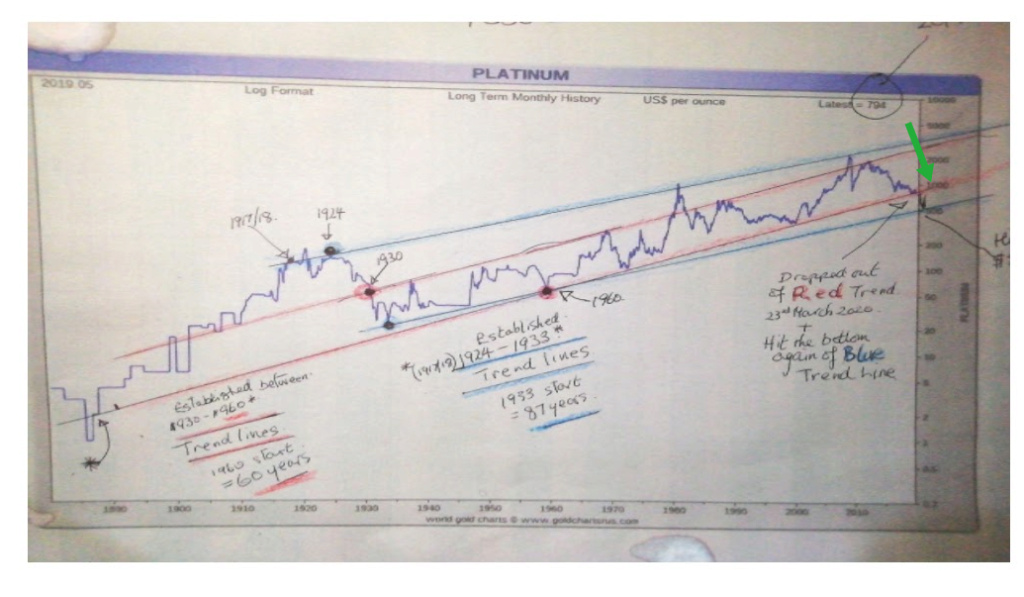 Hi folks
I’ve been looking at this very long-term chart of Platinum again and updating thoughts on it.
In March 2020 Platinum hit the bottom of the blue trend line. Over the 16 months since then it has rebounded up to almost $1300 in Feb 2021. In doing this it has surged through the bottom of the red trend line. Now it has retraced its steps to $1027* and is testing support at the bottom of red trend line. If it drops much further it will fall back into the blue trend. However, if the support holds then we may find that it is the start of new leg up. Platinum is at a critical junction – could be a big bounce soon or a further large drop.
The green line points approximately to where we are now. Quite difficult in this 140-year chart.
*Wednesday August 4th 2021 @20:28

m&m prospecting wrote:If I knew how to find platinum then I'd be all over it its around me in the creeks and such but knowing what I'm looking for is difficult due to the black sands and silver particles that's look like platinum

Platinum can be found amongst the Gold, usually embedded in the gold.
I found a article so I will attach it. But essentially it is found in Africa, Russia and some parts of North and South America.

m&m prospecting wrote:Rite ive heard of platinum being in the area im in but recovery might be the issue

Look at ways to separate and identify platinum. It is there but as I am not a miner, I am not going to pretend to know what to look for. I just know the basic theory behind it. Which means I know nadda.

Similar topics
Similar topics
Permissions in this forum:
You cannot reply to topics in this forum
Latest topics
Working hard todayToday at 1:51 pmAceBullionA welcome task aheadToday at 8:22 amAceBullionWelcome Sil4me2 our 151 member. Yesterday at 3:48 amThe Cat's MotherFamily pets Fri May 20, 2022 7:52 pmJazzSpicy silver - may the fourth be with you 1oz .999 rounds 55 each posted SF Fri May 20, 2022 5:44 pmLiam_Hingston
Sponsors
Clicking onto any sponsor in Blue will direct you to a website. Any sponsor in Red has donated but does not have a website